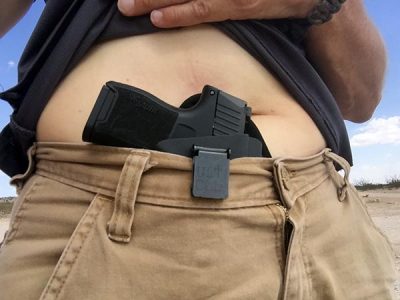 Understanding Wisconsin state law can help keep you out of trouble when it comes to where you can and cannot carry a concealed weapon, even if you have been issued a CCW permit.

One of the more commonly asked questions about CCW is whether or not you are allowed to carry in a tavern, or bar. The state Wisconsin defines a “tavern” as:

“… any establishment, other than a private or fraternal organization, in which alcohol beverages are sold for consumption on the premises. Wis. Stat. § 941.237(1)(fm) and (3)(cx)”

Without a CCW permit, it is illegal to carry a concealed weapon anywhere, but if you have been issued a concealed carry license, you are legally allowed to carry your firearm concealed in a bar, only if you are not consuming alcohol.

Carrying a concealed weapon while under the influence of an intoxicant is classified as a class A misdemeanor, and punishable with up to 9 months in jail and a $10,000 fine.

What is the definition of “under the influence?”

For CCW purposes, the state of Wisconsin defines intoxication as:

“… materially impairing the ability to handle a firearm which is further explained as consuming an amount of alcohol to cause the person to be less able to exercise clear judgment and steady hand necessary to handle a firearm. WI Jury Instruction-CRIMINAL 1321.”

In most states, the same methods for prosecution are the same for drunk driving as they are for firearms. If you drink, don’t drive, and if you’re carrying concealed, don’t drink. Not even one. Take your pistol home and lock it up in the safe if you’re planning to go to the bar.

Other places it is illegal to carry a concealed weapon in Wisconsin, even if issued a CCW permit, include:

State and local governmental buildings may prohibit legal concealed carry if they decide to and must post a Notice of Refusal of Right to Carry Concealed to inform citizens. This topic of “No Guns Allowed” signs will be addressed in the next article.

Now for the disclaimer: I am not currently, nor do I intend to become a lawyer. Seek out your own expert opinion in the law. If you have information that can clarify or reform the article, please feel free to leave a comment below so it can be addressed.

Visit Concealedcarry.com for everything you need related to CCW gear, training, information, and news.

How to Apply for a CCW Permit in Wisconsin
Should You Respect a “No Guns Allowed” Sign?

Great class! Malissa is very knowledgeable, a great teacher! Questions are encouraged and safety is her #1 priority. I will be taking additional classes, highly recommend!

This class was great! This was a smart, safe, responsible concealed carry course! I feel empowered! I look forward to taking a personal defense course with Malissa